We are all used to HSE visiting site and reviewing our arrangements on safety.  If these fall below expected standards we typically see Fee for Intervention costs (FFI) and the possibility of the serving of Improvement or even Prohibition notices.  What’s unusual is when a HSE Inspection results directly in prosecution.

HSE launches several campaigns each year across the different regions of the UK to check on site safety and hundreds of sites are visited.  We know that the April visits in our own region resulted in more than 50% of sites receiving FFI and/or enforcement action.

One site visited in Wilmslow led directly to a court case, an unusual step for HSE.  Read on to find out why these steps were taken. 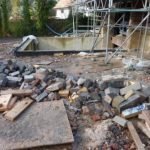 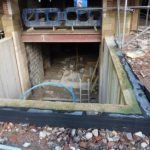 Despite no specific injury having occurred the site was so poorly organized that the inspector decided that a prosecution was the best course of action. Reference to the photographs above show the poor state of the site and it was felt that a death or serious injury was a real possibility.

Key failings were the missing and removed edge protection and general site debris – this was not removed from site but was tipped to the rear of the plot burying the footings of the scaffolding and making access hazardous.

A prohibition and Improvement Notice were served and the subsequent prosecution saw Skyline Building Services Ltd  fined £20,000 with £4095.60 costs.

“Numerous failings were found on this site, including serious risks of falls from height and site tidiness that could have resulted in major injuries or even death.

Skyline Building Services Limited showed scant regard for the safety of the workers they were responsible for and it was fortunate that nobody was seriously injured or killed.”